"It is not the critic who counts;
not the man who points out how the strong man stumbles,
or where the doer of deeds could have done them better.
The credit belongs to the man who is actually in the arena,
whose face is marred by dust and sweat and blood; who strives valiantly;
who errs, who comes short again and again,
because there is no effort without error and shortcoming;
but who does actually strive to do the deeds;
who knows great enthusiasms, the great devotions;
who spends himself in a worthy cause;
who at the best knows in the end the triumph of high achievement,
and who at the worst, if he fails, at least fails while daring greatly,
so that his place shall never be with those cold
and timid souls who neither know victory nor defeat."
Theodore Roosevelt, Citizenship in the Republic Speech 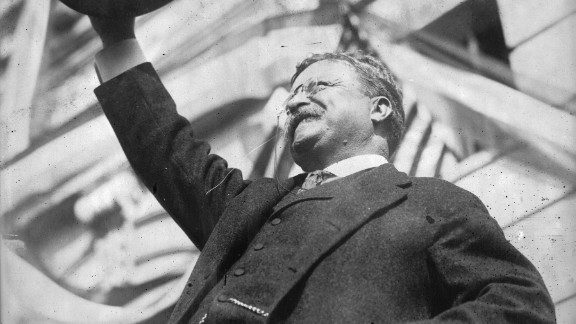 Roosevelt's "Man in the Arena" Speech

Theodore "Teddy" Roosevelt, our adventurous and audacious 26th president, made history by offering this speech at the Sorbonne in Paris. His eloquence matched the significance of the venue. The Sorbonne was highly regarded as a cultural and scholarly epicenter in all of Europe. In context, this speech was carefully constructed as he forcefully confronted those who opposed the United States' arrival onto the world's stage. This speech epitomized his life as much as our countries future.

Roosevelt's early life proved a grand obstacle, asthma. In that era, the only "remedies" were smoking cigars, drinking coffee, and whiskey. You could have predicted their lack of effectiveness, but those were stranger days. As a young boy, Roosevelt's father lectured him in saying that in order to develop his body, he would first have to develop the mind. Teddy's relationship with his father only strengthened as his father stayed up late with him as he fought through the sickness.

Teddy took the message of Muscular Christianity to heart as he becomes a practitioner in weightlifting, gymnastics, horseback riding, swimming, hiking, boxing, and judo. Just as his father said it would, the body submitted to the mind, and asthma disappeared without the help of whiskey (ha!).

Like every confident man, he risked being misunderstood. His approach to living boldly and passionately developed a swath of admirers and adversaries. Roosevelt was not a provocateur; he was a promoter of a new way to live. This is the way of a man in the arena.

What scars show your trustworthiness?

What stories will your kids tell of your willingness to stand in the arena?

Be valiant.
Get in the Arena.
Be a New Man.

Another man in the Arena,