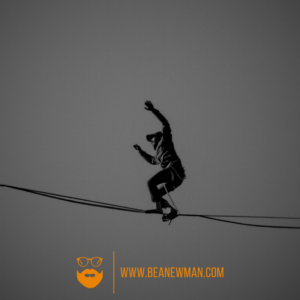 Handling criticism can feel like walking a high wire over Niagara Falls. In all honesty, I have never seen Niagara Falls but the pictures give it just enough cred to convey the meaning. I may be judged here but the thought of going over the Falls in a barrel sounds pretty epic, but then the thought of dying really doesn’t… so I think I will pass.

Criticism is a bit risky. Being true to our nature, no one enjoys being told, “Oh, thanks for telling me I suck at that!” There is an inherent risk on the other side too. What if, in our blindness, we are about to make a catastrophic mistake and no one says, “Hey man! Um, that’s bad, really, really bad, and if you continue to do that you will regret it.” The point being, we could benefit from some honest, open, clear, and respectful criticism.

Consider the Source of the Criticism

Consider the source. Just like those Pinewood Derby cars my son and I built in the cub scouts, not all of them weigh the same. Your wife should get more credence than your butcher. Do we still have those? Anyway… you know what I mean. My wife and I have been mastering (not perfecting) this for decades, but the early years were rough! I know she has my best interest in mind, and because of that, our marriage is on a whole new level. I don’t always like criticism, but I try to listen.

Your close friends, Band of Brothers, should be given a green light to give constructive criticism. In his little book with the same title, Stephen Mansfield gives 5 Essentials of a Band of Brothers:

Every guy needs a place where other guys can say what needs to be said without your push back. It can be over a fire, on the lake, or at the golf course. Guys need space and grace to grow. Mentors are great sources of needed criticism. After being agreed upon, a mentor can really help you navigate the howling winds of the high wire. When a man gives helpful criticism, he is doing you a favor.

Consider the Substance of the Criticism

After considering the source, is the substance of their criticism valid? We have to resist the emotional tug to overreact through EGO. Breathe deeply and let the initial emotional response pass by. The fight or flight part of your brain is called the amygdala, and as we grow in spiritual and emotional awareness, we can learn to modulate the fight or flight mechanism and move forward without emotional restraint. Navy Seals do this all the time. It’s how they improve collectively and individually. They are in constant improvement. In a podcast interview, I had recently, Jason Gardner said that is something that sets them apart.

Criticism is beneficial when it is actionable. If possible, you want to do your best to avoid the problem again. Further, you want to know the warning signs so you can pivot.
I offer some potential next steps.